Mito-PQQ is designed to help support optimal mitochondrial biogenesis, which is critical for the promotion of healthy aging, optimal energy production, and protection from reactive oxygen species (oxidative stress). 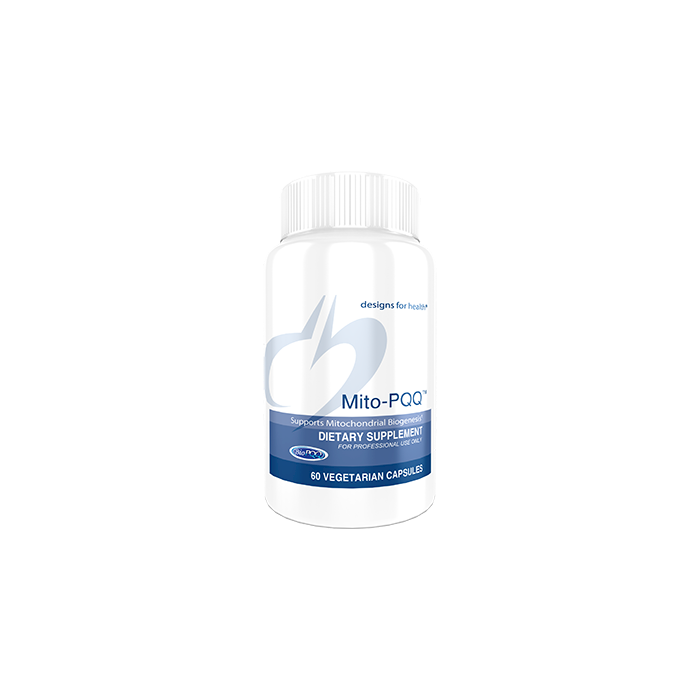 Mito-PQQ is designed to help support optimal mitochondrial biogenesis, which involves the formation of new mitochondria and increasing their density. With an increase in mitochondrias density, more ATP is formed, which translates into more energy as well as a greater capacity to burn fat for energy as opposed to storing it as body fat.
Because aging is associated with deterioration at the cellular level, proper mitochondrial biogenesis growth and division of pre-existing mitochondria is critical for the promotion of healthy aging, as well as optimal energy production, and protection from reactive oxygen species (oxidative stress). Mitochondrial dysfunction, with its associated ATP deficiency, is related to a host of diseases, including chronic fatigue syndrome, degenerative neurological disorders, cardiovascular disease, obesity, and even diabetes, as reduced mitochondrial biogenesis has been demonstrated in metabolic syndrome.

Highlights of Mito-PQQ
Pyrroloquinoline quinone (PQQ) is a water-soluble, vitamin-like compound, although not a vitamin itself. It is an enzyme cofactor possessing antioxidative, neuroprotective, and cardioprotective properties and actually encourages mitochondrial biogenesis. PQQ stimulates cell-signaling pathways that can initiate the potential for increased mitochondrial production. It works by influencing the activity of PGC-1, a major protein involved in the regulation of energy metabolism and mitochondrial biogenesis.

Do not take close to bedtime, due to its potential energizing effect
Use caution with Rhodiola rosea may be too stimulating for anyone with anxiety or panic attacks
Can be taken together with Mitochondrial NRG for maximum mitochondrial support

More Information
Reviews
Write Your Own Review
Only registered users can write reviews. Please Sign in or create an account
Related Products
Check items to add to the cart or