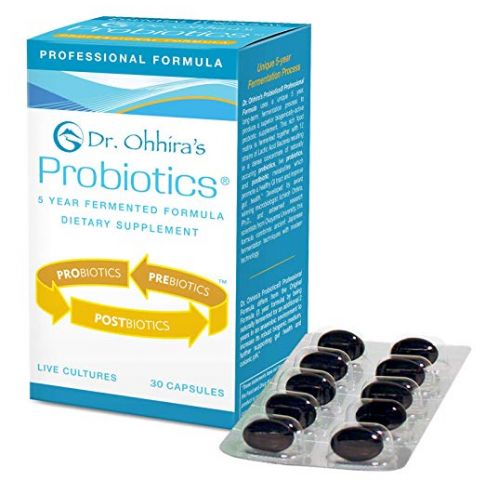 Be the first to review this product
In stock
SKU
OMX1030

This formula is known to re-populate the intestines with friendly, beneficial bacteria that are essential to a healthy digestive system, immune system and for overall wellness.

The bacteria count per capsule is roughly 780,000 - 1,000,000. However, because of the fermentation process used in development, once introduced into the digestive system, the bacteria count doubles every 30 minutes for approximately 8 hours.

This rich food matrix is fermented together with 12 strains of Lactic Acid bacteria resulting in a dense concentrate of naturally occurring prebiotics, live probiotics, and postbiotic metabolites which promote a healthy GI tract and improve gut health.

1. Enterococcus faecalis TH10 – The proteolytic power of Dr. Ohhira’s proprietary TH-10 strain is what distinguishes it from other Lactic Acid Bacteria (LAB). Proteolytic power is the ability of LAB to digest protein during the fermentation process. The greater its ability to digest protein, the greater the power of the LAB. Enterococcus faecalisTH10 has been found to produce compounds that promote a balanced microbiome and healthy gastrointestinal function.

Much more than a probiotic.

Dr. Ohhira’s Probiotic is an all-natural, SUPERIOR PROBIOTIC developed to support digestive comfort, nutrient absorption and a healthy immune system. Proven effective through over 20 years of use, currently sold in over 15 countries, and backed by over 20 university-based scientific studies. Unlike most other probiotic products, Dr. Ohhira’s Probiotics are not cultured or grown in a laboratory. Ingredients such super-fruits and vegetables – are fermented for five years with 12 distinctive probiotic strains. The longer 5-year fermentation process results in a highly concentrated formula optimized for individuals with complex digestive and immune health goals.

This rich culture medium (PREBIOTICS) from the fermentation process is then encapsulated along with: the Probiotics that have grown together over the five-year period; and the resulting nutrients from this fermentation process (POSTBIOTICS), thus delivering viable probiotics and encouraging your body’s innate ability to grow its own friendly bacteria.

When Dr. Ohhira’s Probiotics are encapsulated after 5 years of fermentation, you actually get three products. Each capsule contains multiple strains of probiotic bacteria along with the extensive array of prebiotics which support the growth of the probiotic. The capsule also contains a substantial “dose” of all the post-biotic metabolites that the probiotic bacteria have been producing during five years of fermentation (no other product can compare.)

Product needs no refrigeration! – Fermentation at seasonal temperatures results in capsules that have a three-year shelf-life at room temperature.

The PostBiotics which are the nutrients developed in the fermentation process and included in each capsule include: Short-chain fatty acids and other organic acids (such as acetic, citric, fluvic, humic, and phenylactic acids), oligosaccharides, polyphenols, melanoidin (anti-oxidant), and trace amounts of chelated minerals, vitamins and amino acids.